Yes, Selkirk Snowcat Skiing offers spectacular ski terrain and is known for epic dumps of powder snow. But our guests come back year after year because the combination of our rich history, our fantastic staff, the atmosphere, and our unique mountain culture. 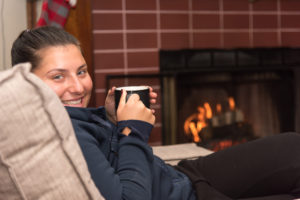 Five full days on the mountain. No where else will you get in as much skiing as with our unique 5 day/6 night tour package. Our guests overnight after their last day of skiing and leave the next morning. This means your last ski day isn’t shortened and you can relax and enjoy apres ski, dinner, and the best party of the week!

Check out our dates and rates 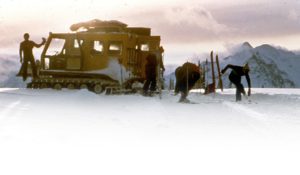 Snowcat skiing was pioneered at Selkirk Snowcat Skiing in 1975 by our founder, Allan Drury.

Over the past 40 years, Selkirk Snowcat Skiing has developed a deep and loyal following amongst powder and backcountry enthusiasts looking for an alternative to traditional lift-serviced and helicopter skiing.

In the late 1960s, Allan Drury was one of the first skiers to venture into the BC mountains with the iconic Hans Gmoser and his then “upstart” Canadian Mountain Holidays.  A life-long skier (he even grew up with the legendary McConkey ski family) Allan’s early heli-ski experience, coupled with his kamikaze spirit, led him to ask, “Why can’t I do this?” As always, he knew he could. He remembered as a ski instructor in Aspen, seeing snowcats ferrying skiers to areas soon to be open via lifts.

Back then, skiers rode on benches in the back of the cat with umbrellas to shield them from the flying snow. So Drury contacted Bombardier and helped them design a 12-passenger snowcat with an enclosed cab on the back. Now all he needed was a great place to go skiing.

When Allan and his wife, Brenda, decided to pursue opening a backcountry ski operation back in the early 70s, they had first dibs on one of the most spectacular, snow-drenched, vertically-blessed parcels of land anywhere in the world.  By happenstance, they stumbled upon Meadow Mountain, an area already serviced by mining and forest roads. Spectacular peaks surround Selkirk’s tenure, framing what is often cited as the best cat serviced terrain in the world. With cat roads that reach a staggering 2,530 metres (8,300 feet) which access wide open alpine bowls, mellow glades and challenging steeps and chutes, powder enthusiasts the world over soon became enamoured with the place.

Today, Selkirk Snowcat Skiing is known throughout the world as one of the finest commercial backcountry operators in the snow sports industry.  Its family atmosphere; genuine commitment to staff, guests, and surrounding community; respect for the environment; and high operational standards are all reflections of Allan Drury. Sadly, Allan passed away in January of 2008. He is deeply missed by his family, friends and guests of Selkirk Snowcat Skiing.

In 2001, along with their two young children, Shannon and Liam, Paul and Megan Osak left the corporate world in Toronto to carve out a new life for themselves in Nelson BC.  An adventurous spirit and a desire not to settle were the main drivers behind their move.  The family bought a local business and quickly found themselves part of the fabric of small town living. In 2007, and in what would turn out to be a prophetic move, Paul stepped in to save the floundering Whitewater Ski Team.

His energy and enthusiasm was instrumental in rebuilding the club and attracted many new families.  While the kids raced, Paul and Megan could always be found volunteering somewhere on or off the course.  In December 2013, Paul and Megan became only the second owners of Selkirk Snowcat Skiing in its 40 year history. They attribute the company’s success to Allan’s vision and the thoughtful stewardship of the dedicated staff. They continue to upgrade and improve the operation both on and off the mountain to enhance the overall guest experience.  Paul and Megan are proud to carry on on the long standing traditions which make Selkirk such a magical place and continue to set it apart from its competitors.

In our wilderness setting, we are keenly aware that everything we do has an environmental impact. We strive to meet our guests needs while keeping our impacts to a minimum. Our lodge is powered by our own micro-hydro system (with diesel generator back up), and vegetables served at the lodge come from local farmers. Our staff go to great lengths to reduce, sort and transport our waste and recycling and we use biodegradable cleaners.

Read more about the HCC Wildlife and Environmental Research Fund 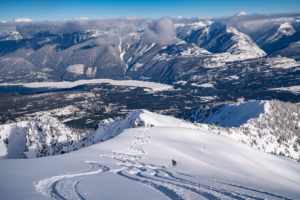 Simply put – we invented cat skiing. This means we had our first choice of terrain!

Read more about our terrain 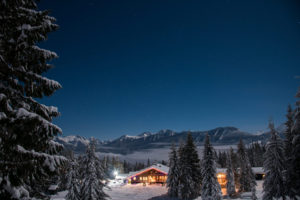 Our remote lodge is comfortable, warm and inviting. It has the amenities that matter most.

Read more about our lodge 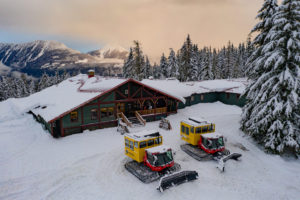 We run 2 snowcats with a spare cat on standby so you will never miss a day of skiing or riding.

Read more about our snowcats 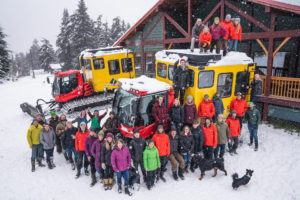 Our team are second to none – many have been with us for so many years they are family.

Read more about our staff

You will be served delicious, home cooked meals prepared with fresh, local ingredients.

Read more about our food 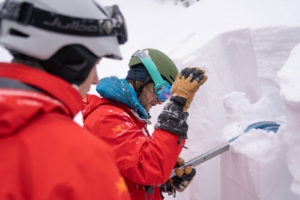 We are dedicated to backcountry safety. All our guides are trained and certified.

See our commitment to safety

"So, how do we tell our wives our 'once-in-a-lifetime' trip is now an annual event?"

Taking you on the road less travelled 🏔. 2 Pist

Wouldn’t it be nice to have a refreshing shot of

Another quiz, maybe too easy. Anyone out there who

These pics were taken by our maintenance manager f

Welcome aboard to Eric Chevalier “Chevy” who j

@timeplacedrift, one of our bartenders, has reache